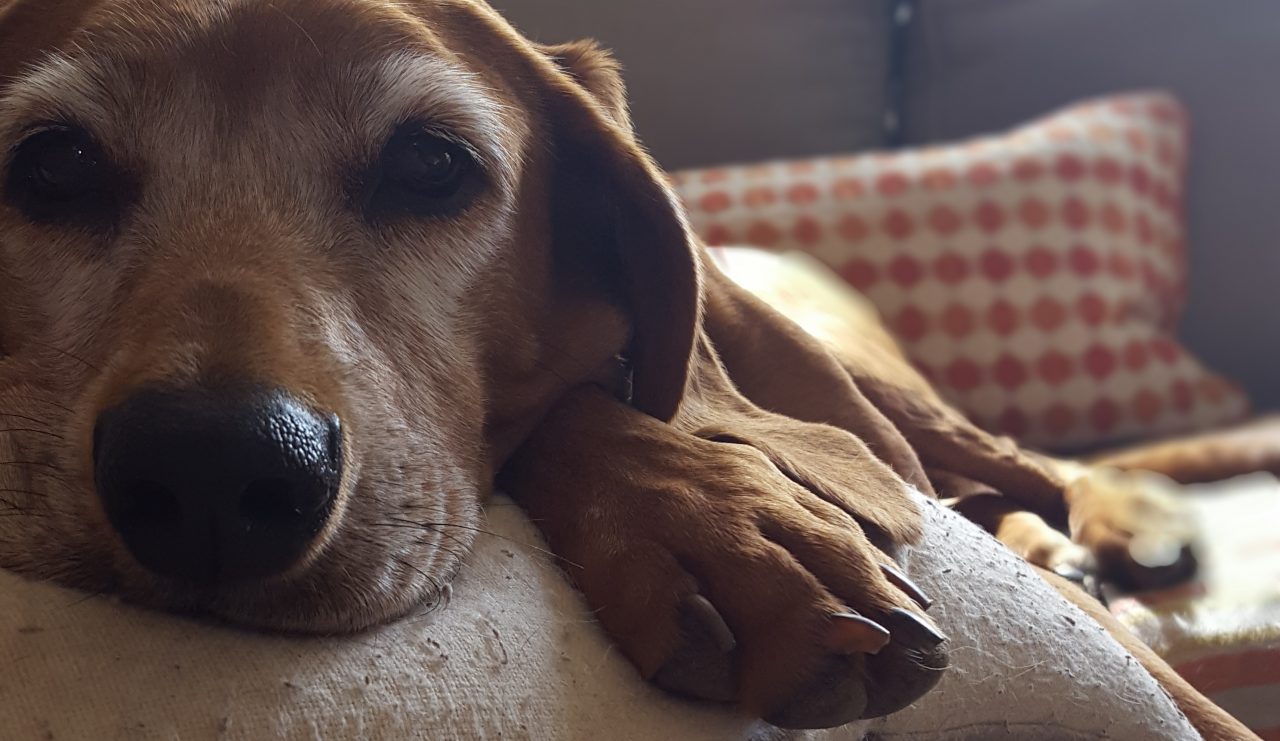 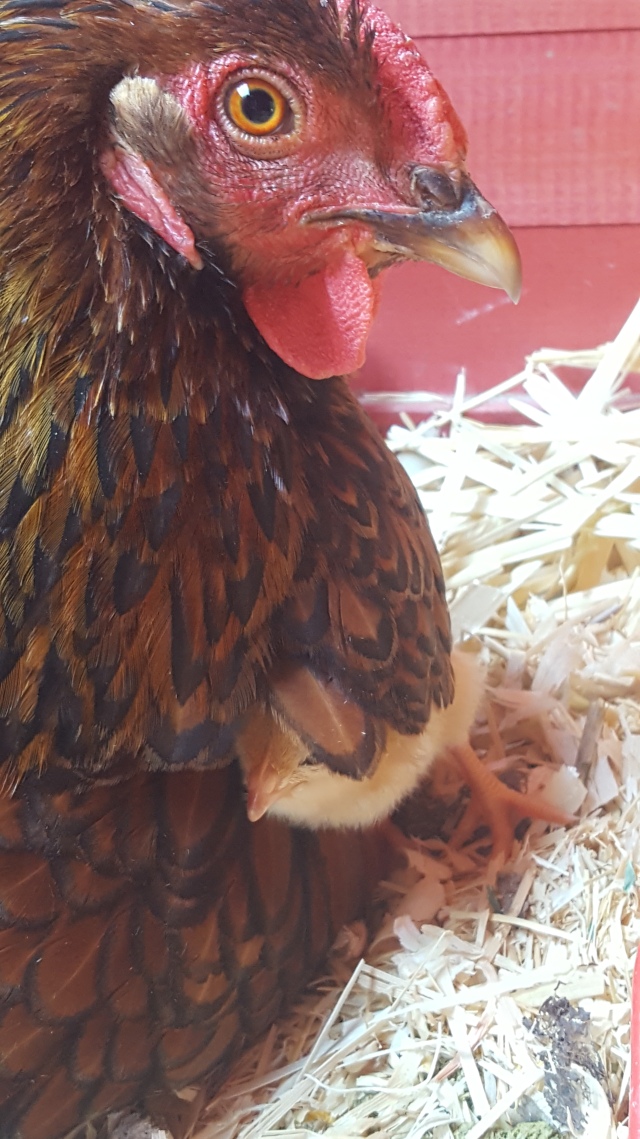 When you have 11 chicks ranging in age from 4 to 5 weeks old scrambling around for bugs chirping incessantly in the run area right next to you, and when said chicks lived in your bathroom for nearly a month…well you kind of always think you hear chirping.

Saturday morning though, I could have sworn there were little peeps coming from the red coop to my left…all other chicks were to my right.

Rayna had been sitting for exactly 21 days. I was guessing hatching would begin the first part of the week. Still, I stuck my head into the coop. The velociraptor also known as Rayna, fluffed up her feathers and growled at me like she has done every day for three weeks. No peeps. Just growls.

I went back to the business of straightening up around the run doors to begin alternating use of it between Mr. Millie and his girls and the youngsters.

Seriously. I know I heard something that time.

I stuck my head in again. Same fluffed feathers. Same growl. This time I noticed something sticking out from under her left wing. At first I thought she had just plucked and mussed her feathers to give the eggs more skin contact, as I have read they will do. But just like that it moved and a tiny, fluffy head emerged.

I caught my breath and stared. Rayna stared right back, daring me to make a move. 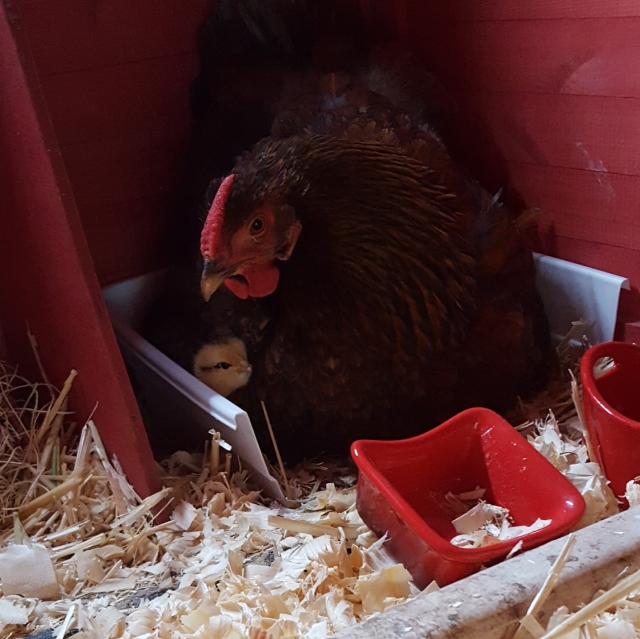 I did make a move for food and water. I gave her one of the extra dishes of starter crumbles I had scattered about the youngsters’ coop. She immediately ate some and then began showing her little one how to do it. I went inside to fill a dish with water. I got no ruffled feathers or growls with this…and she drank the entire dish while I stood there. Her little baby – Maddie, btw, cuz, Rayna, you know, TV show, Nashville – moved around occasionally trying to get back under mama, but would then pause and peck at something in the shavings. I was simply mesmerized.

Hatching baby chicks had not been part of the plan this year. None of my hens had ever shown any inclination to sit. Mind you this is their first spring as adults, but still. I just didn’t expect it. So when that mood hit Rayna 3 weeks ago, rather than try to break her of it, and potentially lose a hand in the process, I decided the let nature take it’s course. This also despite the fact that this year’s flock of 7 baby chicks that I ordered online became 11 in just one week. Whole other story.

To me this was the coolest thing I’d ever seen. My mother reminded me I had certainly seen this happen at the State Fair as a child. Well, okay, Mom, I’m sure I did, but it’s been a long time since I have been a child. And this was happening in my back yard with chickens I’ve raised!

Eventually Rayna had had enough of my gawking. She didn’t growl at me, she simply offered Maddie a tiny peck encouraging her to go back under mama and out of the endless stare of the human. And maybe that will make the human go away.

I left them in peace, checking in every few hours adding food and water. Every time I showed up if Maddie was visible, Rayna gave her a nudge and opened a wing encouraging the little fluffball to snuggle back in until the dangerous human bringing food and water was gone.

By Monday morning it became clear now that Rayna had an actual chick, versus just eggs, to peak the curiosity of her coop-mates and thus to protect from them, she could not stay in the coop safely.

So I set her up with dog crate and a tarp, lots of fresh shavings, water and food and solitude in the run which connects both coops, but can also be shut off from both coops. She seemed to know what I was up to as I got no ruffle of feathers and only a mild growl when I picked up her entire nesting box and moved it to her new residence.

“Stay still…trust me,” I kept telling her. Yes, I talk to my chickens…doesn’t everyone? She leaned her head over the edge to survey the ground below just a bit, but then settled in and as soon as I sat her down in the dark, cozy dog crate, she fluffed up not defensively, but contentedly and I think she actually might have offered me a purr, realizing I’m on her side. 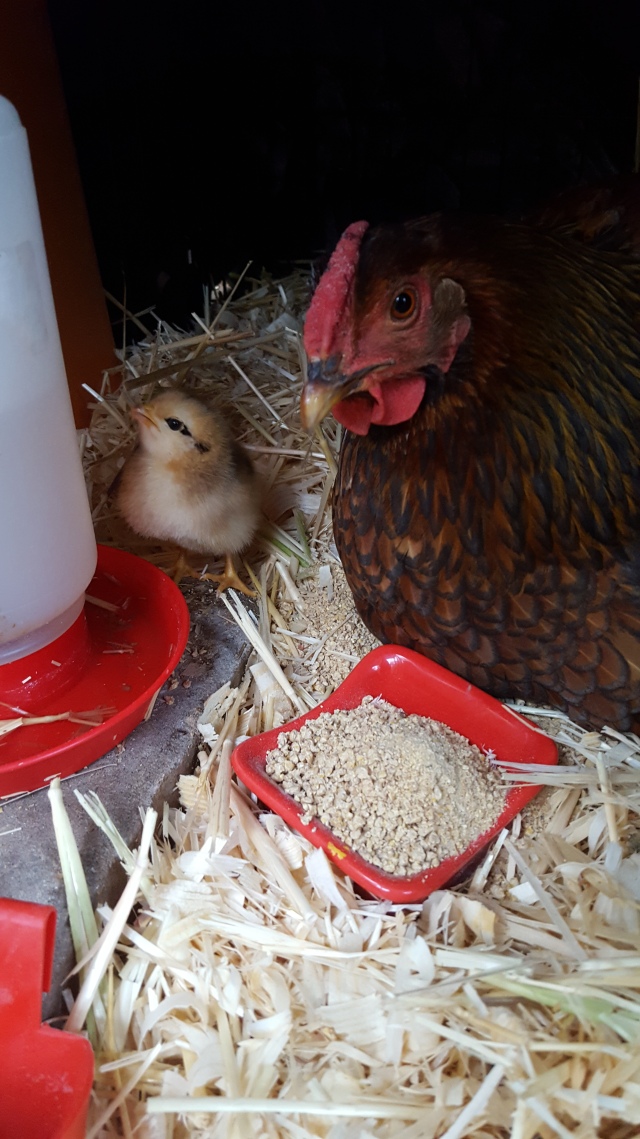